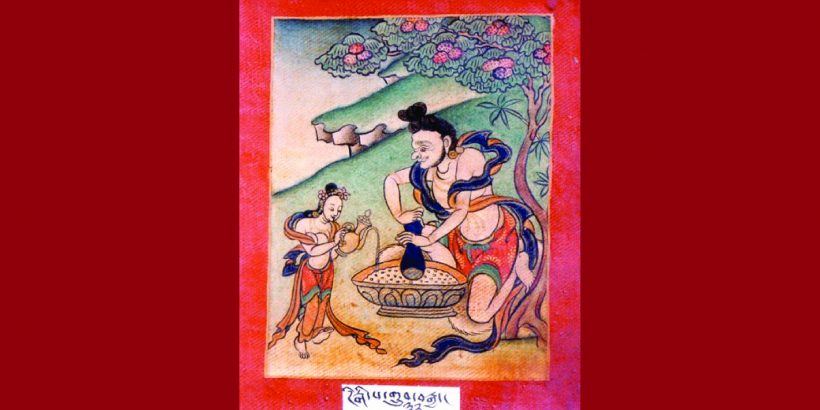 Dengipa was the brahmin minister to the King of Pataliputra. King Indrapala, whose initiatory name was Darikapa, had been awakened to the karmic misery of his situation by the yogin Luipa, and when he decided to renounce his kingdom and the world, l;>e:rigipa echoed his master’s decision. Together they went down to the cremation ground to meet Luipa. The Guru welcomed them, and gave them the initiation and empowerment of Sarpvara. They had nothing to give the Guru as the customary initiation offering, but he accepted the offering of their bodies as slaves, which he intended to sell. He took them first to Orissa, where they stayed some time, begging their food. The story of how the king was sold is related in the legend of Darikapa.

Luipa and the brahmin journeyed seven days to reach Jayantipur, a country with a Buddhist king,, and there they went straight to a brothel, where Luipa asked for an audience with the chief courtesan. “Is your mistress interested in buying a male slave?” he asked the door-keeper.

“I will buy!” came a voice from within. “What is your price?” “One hundred ounces of gold,” Luipa told her.
The deal was concluded after the courtesan agreed to two conditions: first that the brahmin should sleep alone, and second that he should be released as soon as he had earned the equivalent of what had been paid for him. The brahmin was led away, and the Guru departed.

The brahmin slave pleased his mistress and was respected by her servants. They called him Swamiji, Honorable Sage. One day when his work was finished, the courtesan forgot to send him his evening meal. He went out into the garden, where it was his custom to retire, but later his mistress remembered him and sent out servants with food, and to their amazement they found him served by fifteen girls, his body radiating light. When the courtesan was informed she was ashamed that she had not recognized her slave’s holiness. “I have done wrong in treating you as a slave for twelve years,” she said contritely. “Now let me serve you as my priest.”

Dengipa refused her offer, but taught the Buddha’s message to her and to the people of Jayantipur. He initiated them into the mandala of Vajra Varahi and instructed them in her sadhana, and eventually he went to the Dakini’s Paradise with seven hundred disciples.