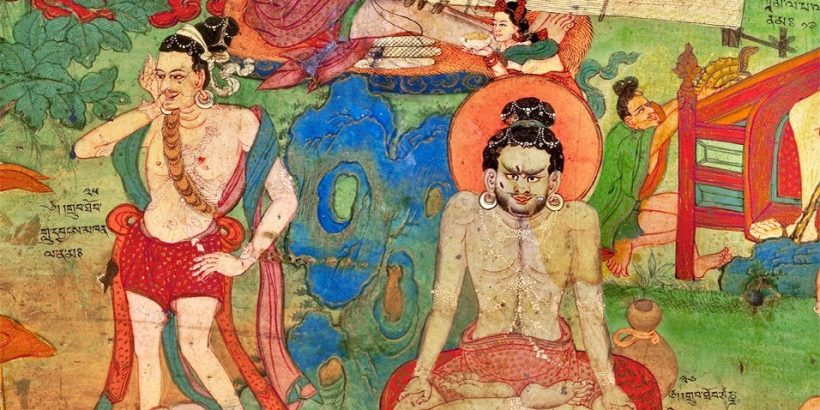 The city of Gorakhpur in India keeps a secret from ancient times, a temple with 84 statues of outstanding beauty and mystic significance. Each one different yet impeccably dressed in siddha garments and each with the hair tied up in a topknot, in an individual design and pattern. The 84 figures of human size are seated in a circle inside a large temple hall. A spectacular view!

The temple is mainly dedicated to the tantric siddha Guru Gorakhnath, the mahayogi of the Nath lineage revered as an incarnation of Shiva. The city was a part of the Koshla kingdom of Lord Rama during the Vedic period and in the 12th century the city became the center for Guru Gorakhnath. The 84 mahasiddhas are connected to an extremely broad-minded world view that every situation in life is workable and can be utilized and transformed into total freedom.

Looking through their biographies and life examples, the mahasiddhas came from various background, from beggars to kings. One of the masters was a carpenter, another a tailor. One a renunciant, another a family man with children. One thing uniting them all is the fact that they demonstrated true freedom of mind, and that enlightenment is possible in a single lifetime.

Names of the 84 mahasiddhas from Wikipedia, according to the Abhayadatta Sri Tradition. Many Sanskrit names of the this tradition had to be reconstructed and are perhaps not correct. Several of the Tibetan lineages of Buddhism originate from Tibetans traveling to India to meet an enlightened master, a mahasiddha.

The mahasiddhas are 80 male and four female masters. Please, take the time to read the names of the masters. Some have very interesting meaning:

Here is a informative link from Google Cultural Institute about the legends of the 84 Mahasiddhas, a selection from the Biographies of the 84 Mahasiddhas, as recorded by twelfth century Indian scholar Abhayadatta Sri and translated into Tibetan by Möndrup Sherab. This beautifully illustrated text displayed in this exhibit tells the stories of the 84 great masters, their paths to enlightenment and the miraculous occurrences that marked their lives.

The Mahasiddhas are those who have, in a single lifetime, achieved direct realization of the Buddha’s teachings. They come from all walks of life– they are kings and slaves, daughters and sons, monks and laymen. Their tales suggest that, no matter the conditions of one’s life, total realization can be attained in a single lifetime.  This manuscript is made available to TBRC by the Cultural History of the Western Himalaya Project,”Tibetan Manuscripts,” at the University of Vienna.